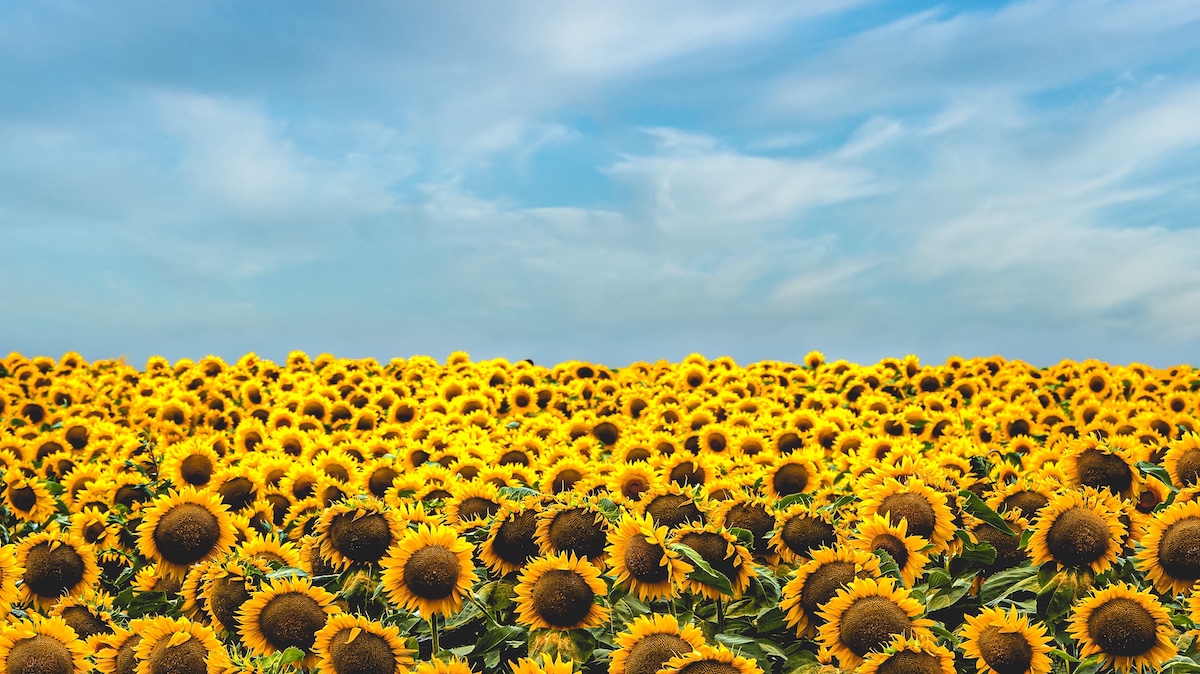 For the past weeks, our thoughts at Grünfin have been with the people of Ukraine.

As a company driven by making human life on Earth more sustainable, seeing the events unfold has been devastating. We gravely condemn Putin’s war and stand with Ukraine as individuals and a company.

It’s difficult to foresee the exact consequences the war will have on our personal lives or the world in the coming weeks and months. Even so, after speaking with many of our customers in the past week, we’d like to share our views on the short and long term effects of the events unfolding.

We hope all of you are safe and have found a way to support Ukraine during these difficult times. We’ll leave you with some suggestions on how to do that at the end of the post.

The short and long term effects on sustainability

The short term effects are already being felt in increased market volatility, and this is likely to continue. Investors are reacting to a relentless amount of news flow and reassessing the war’s impact on economic growth, inflation, company operations and profits, which affect the stock market’s valuation. Governments are also rethinking how to allocate spending, particularly as it relates to defence.

European nations are scrambling to replace Russian oil and gas. Even though the EU is on the verge of outlining a plan, it’s likely the knee-jerk reaction over the short term will be to replace Russian imports with fossil fuels from other jurisdictions, where possible. This means renewable sources are unlikely to be on the table to take over a substantial amount of Russia’s energy share right away.

But looking at the long term, the war has shaken up many of the foundations of Western policy in the recent decades. Some of them give us strong reason to believe that the field of sustainable investing will, in fact, accelerate.

We believe these will be the following key developments for sustainable investing:

How is the transition out of fossil fuels going?

It’s been slow. The world still relies on fossil fuels for 85% of its energy needs. The International Energy Agency (IEA) projects that by 2040 this will fall moderately to 70-75%.

Europe is doing much better than the rest of the world, in part due to our greater use of renewables like wind and solar, but still sources 66% of its energy through fossil fuels. 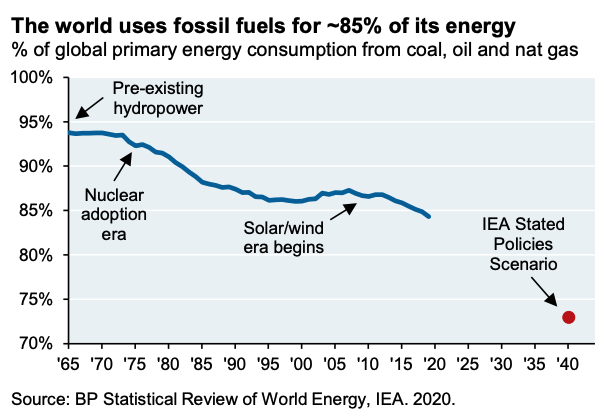 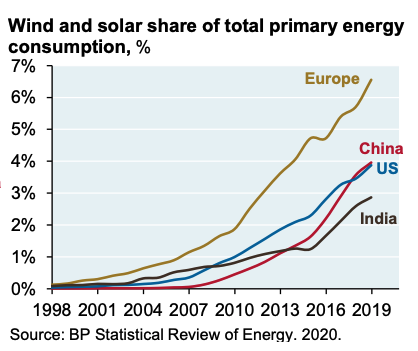 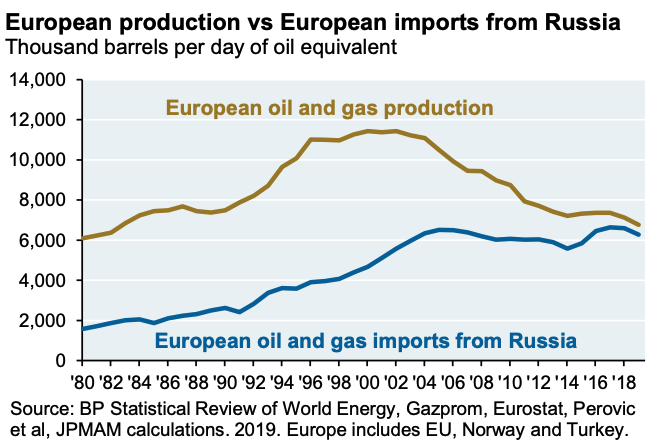 Solar and wind energy produce little CO2 and are critical for achieving the Paris Agreement’s goal of net-zero emissions by 2050. In fact, we will need to generate 90% of our electricity from renewable sources by then for us to achieve this.

Relying on Russian oil and gas is clearly unviable now and, unfortunately, Europe had to learn the hard way.

Therefore, we foresee a scenario in which over the years Europe abandons large amounts of fossil fuels in favour of renewables like solar, wind and, to a lesser extent, hydro. Governments, businesses and investors will work together to accelerate this trend. The inflow of large amounts of capital will expand capacity and lower costs. Government grants will be awarded for research and innovation. Subsidies will be provided to individuals and businesses for increased adoption. This would clearly be a positive development.

But we are facing a challenge: sunlight, winds and flowing water are not available everywhere or 24/7.

As a result, we expect and can already see the topic of nuclear energy back on the discussion table as a way for countries to become self-sufficient in terms of energy production. (Nuclear energy is also perceived to carry substantial risks, a fact that was recently brought home by the news that Russia seized nuclear plants in Ukraine).

Grünfin will be monitoring these discussions, listening to our customers and doing our own research to take a position once we arrive at a decision point.

The risk and cost of dealing with regimes deemed immoral will be even more thoroughly analysed by companies, governments, and investors. We expect investment analyses to add more weight to metrics like country corruption levels, the reputation of governments, corporate governance, sources of raw materials, human rights, sanctions and boycott risks, etc.

The sustainability scores of developed markets are much higher than those of emerging markets. Consequently, we expect increased capital flows in this direction. 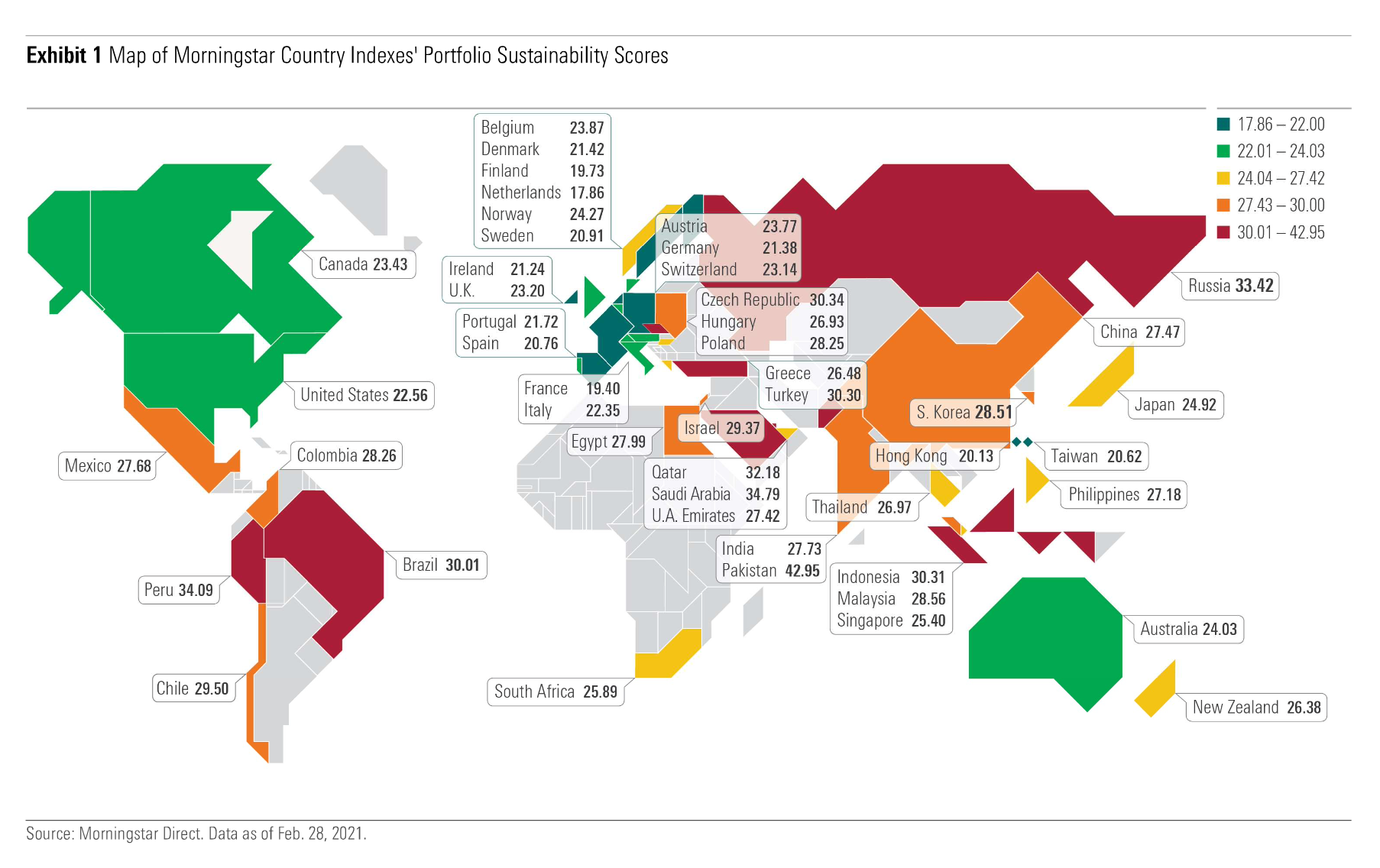 UK prime minister Boris Johnson said on his recent trip to Estonia, “I cannot think of a time in international affairs when the difference between good and evil, between right and wrong, has been so obvious.”

In the days after the invasion, global companies announced divestments out of Russian assets. A type of self-sanctioning is occurring.

UK oil group BP is seeking to divest its 20% ownership in Russian company Rosneft, even though it may result in a loss of $25 billion for BP’s shareholders.

Apple, Nike, Siemens, Volkswagen, Boeing and many more have announced some type of boycott or suspension of operations in Russia.

Large companies have the resources to shift operations and sales from one nation to the other. This capacity reduces the risk they are too invested in the wrong country.

They also have the ability to make an impact with their capital by providing it to those operating within the rules of the system and denying it to those working outside it.

Only 4% of fund assets in Europe have sustainable investment as their core objective. This is because too many companies in this investable universe do not meet today’s sustainability requirements. Things are changing, however.

Companies are under immense pressure from consumers, communities, regulators and investors to achieve higher standards when it comes to the environment and social responsibility. They will have to adapt just to survive, resulting in a convergence of traditional and sustainable investing. “Sustainable investing” will simply become “investing”.

Those corporations not meeting such standards will likely become the outcasts and, thus, uninvestable. Take Norway’s reaction to Russia. As the owner of the world’s largest sovereign wealth investment fund, Norway will begin unwinding its $3 billion worth of Russian positions.

What happens to the stock market from here?

The world’s major stock markets are down 10% or more this year. We can’t foresee the future. We can look to history, albeit with the huge disclaimer that we do not yet know what the outcome of the war in Ukraine will be for the world.

The chart below shows the impact of Russian aggression on the stock market, as measured by the S&P 500, and their recovery after the conflicts. (Note: The Georgian invasion coincided with the 2008 financial crisis, which brought the world into recession and was followed by a slow recovery.) 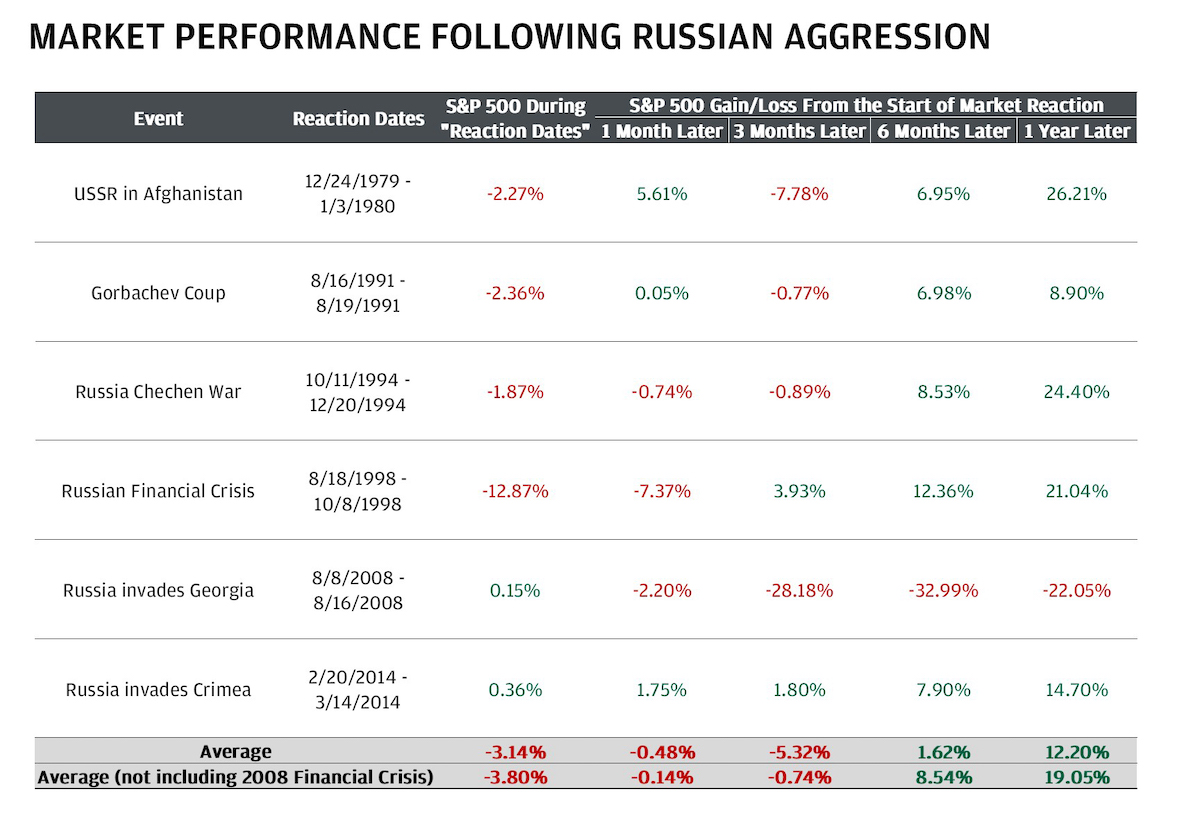 Predicting the next couple of weeks or months is an impossible task.

However, it’s worth keeping in mind that as we’re facing a major threat in the form of Putin’s war, the existential threat of climate change is not going anywhere. In fact, on February 28th, IPCC released the bleakest warning yet about the consequences of climate breakdown.

This gives us reason to say that once we have defeated the terror that’s being unleashed on Ukrainians and stopped it from expanding even further, the world will need to get back as fast as it can to achieving our climate goals. Sustainable investing will play a huge part in this. Also, the dependence on fossil fuels will have a different, even more sinister ring to it – which it deserves.

We stand with Ukraine. 🇺🇦

How you can help Ukraine